Since my coming of age (BMX-wise) in the 80s, the rule of thumb was: the taller the dude, the longer the crank.

Bigger was better, especially if you were tall and snapping gates at the BMX track on the weekend. 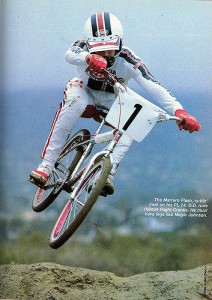 In freestyle, things were a little different.

Crank arm length didn’t mean too much for tricksters. I think most freestyle guys opted –for the most part– the middle-of-the-road 175s and called it a day.

In flatland, there was a bit more experimentation with crank length.

I believe Dennis McCoy was one of the first to opt for shorter cranks.

To help roll out of tricks easier.

Seems legit. Although how far this was embraced I couldn’t say. I’m guessing it wasn’t that widespread.

Fast forward to the modern day….

In racing, spin-to-win clip pedals and more technical tracks prompted some racers to revert back to shorter 175mm cranks.

In freestyle, not so much change (most were rocking 175s anyway).

Or so I thought.

BMX Union recently posted a tech tip on behalf of Profile Racing that seems to throw some of that conventional thinking about cranks on its head.

Turns out, short cranks might be beneficial for everybody….including tall dudes.

Stick with me here.

According to Profile, the advantages of short cranks are:

They even have a testimonial from a 6’4″ rider, Zachery Rogers, who sports 165mm cranks on his ride:

I made the move on a recommendation from Matt Coplon. Shorter cranks help move my feet closer together which is a huge benefit with peg clearance vs. size 14 shoes. It also allows for more control over my bike in reference to spins/responsiveness.”

When I first saw its spec list I was a bit surprised. But apparently they’re right on trend!

I’m kinda curious to find out how widespread this move is to shorter cranks.

Would you switch to (or do you run) shorter cranks?