22″ stalwart, Matt Stahl, has partnered up with Pedal Driven Cycles (PDC) for something special.

The genesis of this collaboration was Matt’s feeling that while many 22″ frame offerings were good, they just didn’t offer exactly what he wanted/needed for his riding style.

So, he approached Big Dave at PDC about designing a park/street oriented 22″ frame…one with a steeper head angle and other geo changes that would be a bit more agile than the dirt-oriented 22s that currently dominate the 22″ market.

A prototype was designed and Stahl and Big Dave rounded up a test crew to test the new frame. That crew consisted of Mad Mike, Ureal Stalling, Tim Timpe, John Wold and Nathan Steere.

The PDC Operator was born.

Two versions were designed: one with a 21.75″ top tube and another, a 22.75″ top tube. (Nathan Steere opted for the shorter one I believe, Matt Stahl the larger option…the other test riders are unknown as of press time) 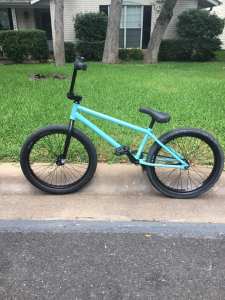 The Seaform Green is the “Mad Mike color” and with every purchase of a PDC Operator frame in that color you’ll also receive some custom Steev Inge-designed Mad Mike stickers…nice little incentive there! (Editors note: Satin Black is also an option.) 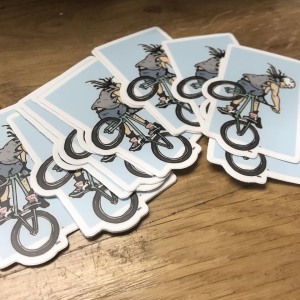 Testing seemed to go well evidenced by some of the clips coming from the crew:

This is a new one for me. I was never able to get it with other bikes. My @pedaldrivencycles Operator makes tech moves much easier thanks to it's modern geometry. The @alienationbmx Vandal rims make a huge difference too! Be on the lookout for the prebook on the #operator22 frame. #pedaldrivencycles #22inchbmx #alienationbmx #shieldbmx #bmx #frontbrakefriday #atlbmx #jibbcrew

Haven’t road a park where I can do any of these tricks in quite a while. Went threw afew tubes and was terrified of snapping my chain again so didn’t quite clear everything like I wanted but here’s some 22 inch Bmx resi session for you. Also first time landing a barrel roll and it was a battle. Such a weird one and hope to get I’m higher and better looking in the future @pedaldrivencycles @nvercautious21 @skizzbmx @22inchbmx #bmx #skatersedge #22inchbmx #pedaldrivencycles #bmxgirl #bmxx #barrelroll #notaflip

If this frame piques your interest don’t sleep on it though….the pre-order period for the first batch (which has already been extended once) ends this Friday…hit up PDC now!