Answer BMX dropped the news recently on social media that they have a OS20 tire in the works.

A welcome development as the only tire game in town these days, OS20-wise, is Tioga.  OS20 tires have been notoriously hard to find in the past little while so another brand option will definitely help a lot of people out.

However, those OS20 outages might be shortlived as Tioga also recently announced that they were ramping up production of the OS20 tires to meet the “huge demand in the past few months.”

Tioga OS20 PowerBlock S-Spec – We have had a huge demand in the past few months, but don’t fret OS20 fans, we are making these right now around the clock and will have tires back in stock soon! Race proven by the fastest racers from your local tracks to the top Elites, the PowerBlock is faithfully recreated in OS20 diameter. Every detail, from precise dimension of the center blocks to the optimal proportions of its shoulder tread, is scrutinized to ensure the OS20 PowerBlock fully takes advantage of its larger size. 20" IS FAST – OS20 is FAST2! What is OS20 PowerBlock? OS20 is NOT 22". OS20 is 20", but bigger. There are two wheel sizes under the 20" category – the 20" on Jr/mini bikes uses the 451mm diameter wheel in narrow widths (for 20-1/8" & 20-3/8" tires), and the conventional 20" which uses the smaller 406mm diameter wheel but in wider widths. OS20 is 451mm wheel diameter in widths similar to 406mm wheels. OS20 tires are not compatible with Jr/Mini sized rims; OS20 rims are not compatible with Jr/Mini sized tires.

It’s interesting to see how, when a new competitor appears, Tioga starts to suddenly address the building demand for OS20 tires.

Maybe now, Tioga will keep the OS20 at reasonable stock levels –and we don’t have to go through droughts of availability — if only because they want to maintain their market share.

Tired of the limited color choices in OS20 wheels?

TNT Bicycles may just have the solution to what ails you.

TNT has done a small run of OS20* rims in multiple colors (see below) to add a little flair to your OS20 ride.

I’m kinda partial to that gold anno myself.

Hit up TNT Bicycles for all the particulars…and maybe do it soon?

Remember the “small run” part above…

This rig is tricked out.

Check out this spec list (in addition to the OS20 wheels), it features:

That’s a lot of stuff going on here.

Just caught this on the socials today…Standard is busting out a rainbow of purty trans colored OS20 frames!

Here’s a better shot of the frames:

I would have a seriously hard time choosing a color from this lineup…they all look that good!

And if color ain’t your thing….clear over raw is pretty dialed too! 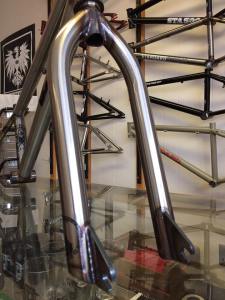 Ever since Chris Moeller dropped word (in July of last year) that a 22″X1.95 tire from S&M was in the works, I’ve been waiting in eager anticipation for it to drop.

Well, it’s been more than a year and we’re still waiting.

No doubt when these hit the market they’ll be a hot item for riders wanting a slimmer tire for racing, lower rotational weight or smaller size (if only to slip under the wheel height race rules).

But in the meantime…you could follow the lead of Rickard at ORP BMX.

This happened. When 22's fit on a Supercross Envy xxl. 22"s fit on Odyssey R-25 forks. Revenge 22"rims with Tioga OS20x1.85. So basically I took a low bottom bracket 20" frame, modified it, and now it is a 22" race bike with disc brakes and with a clean Fresh gloss black paint job. I have disc adapters and King hub shells for disc and titanium rotors in 140 and 160 in stock. #youcantdothat #orpfirstyoucopy #andyousayyoubuildbikes #bmxeveryday #chriskingbuzz #supercrossbmx #tiogabmx #22inchbmx #22bmxrace #anythingelseyouwantmetofigureout #texasbmxalldayeveryday #houstonbmx #purplenipples #tispokes #revenge22 #22rimsandtiresthatsall #titaniumbrakerotorsatorp

According to ORP, “ it’s hard, real hard” to mount OS20 tires on the Revenge rims.

But as you can see from the pictures, definitely do-able.

Wonder how many racers are going to try out this mod…

Jack Hoobler got a hold of us recently to tell us about his Haro OS20 that was built up for him by Marysville Bike Shop in Washington state.

According to Jack, the shop is pushing 22 and OS20 wheels in a a big way, even going so far as keeping a large stock of OS20 rims and tires on hand in-store.

What’s interesting about his setup is that Jack’s Haro is actually a 20″ Pro XL with OS20 wheels added to it. 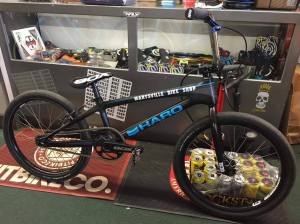 The impetus for the “upgrade” was Jack complaining to the folks at the shop about how hard it was to go from his Downhill bike to his 20″.

They suggested that he try out the Doublecross they had built up with OS20 wheels.

However, instead of hopping on the Doublecross, he decided to borrow the wheels and have them installed on his Haro.

He was skeptical at first about the bottom bracket being too high, but he says the bike now feels perfect. Everything lined up well…including the brakes! He was even able to keep the rear wheel slammed.

Looking forward to checking them in the (hopefully) near future!